Role-Playing is one of the foundations of Kink. Simply put, it’s when we pretend to be something or someone we’re not in order to explore a consensual sexual fantasy. It can be as mainstream as “High School Jock and Cheerleader” all the way to “Master and Slave.”

Sometimes, role-playing can lead to extreme activities, but most of the time, things are purely playful. Some roles require elaborate costumes and equipment while others can be done quite simply & easily. Perhaps the one type of role-playing which has seen the most growth in recent years is “Puppy Play.”  It seems to be particularly popular among younger adults, and over the past 15 years, there’s been an online explosion of Pups, Handlers, Owners, and Groups.

Puppy Play has nothing to do with actual dogs or puppies, that’s bestiality, which is COMPLETELY different. Not to mention, illegal.  Puppy Play refers to when humans act like dogs or puppies; crawling on their hands & knees, rolling around, barking, and generally playing as canines.  Handlers are exactly as they sound; they handle the human Pup as if they’re an actual pet – with commands and rewards. The only real difference between a Handler and an Owner is that the Handler may or may not be in a full-time “play” relationship with the human Pup, while an Owner is usually in an exclusive relationship with the Pup.  A Handler may even only “handle” a Pup for one event or play scene.

Aside from general safety rules like “safe words,” there aren’t any universal rules for Puppy Play.  Some pups wear hoods or masks, paws, and even tails to resemble dogs further, some don’t. Some pups want a Handler or Owner, and others don’t.  Some incorporate Dom/Sub (Dominant/Submissive) dynamics or humiliation into their Pup Play, and some don’t.  Each player’s dynamic is completely up to whatever they freely negotiate with the other players in their group or scene.  As long as everyone involved gives their consent freely and nobody is being harmed in any way, it’s all good. Give a dog a bone!

I’m sure some of you reading are wondering, “Why would anyone do this?”
Well, there are actually many aspects of Puppy Play people find appealing, and as I mentioned earlier, its popularity is only growing.

For some, it is the idea of Dominance & Submission – they like the idea of ownership & control (from either perspective).  Many people also have fewer barriers when it comes to showing affection towards pets than they do towards other people.  When your playmate is wearing a dog mask, barking, and crawling on the floor, it’s not that big of a leap to see them as a loving pet; conversation isn’t even required during play.

Many Pups find a lot of joy in the physical interaction with other Pups, as well.  They can wrestle, hump, and play with one another without needing to ever speak.  Sometimes Pup-Players have full-on penetrative sex like dogs in heat at an off-leash park.  It’s a chance for them to let go of their conscious thought, existing in a moment like a real dog might and it can be very freeing.

Other Pups enter a headspace we call “Pup Space”.  In Pup Space, Pups focus specifically on the “here and now.” They enter a sort of meditative state where they can temporarily be freed from thinking about the past, the future, or day-to-day matters. They react to each moment, and nothing more. It can be quite stress-relieving.

The most common piece of gear a Puppy-Play enthusiast will buy is a dog hood or mask.  The mask helps the player let go of their human persona more easily, and instead, they become much more dog-like.  It also helps other players see them as a canine and then treat them as such.  There are many different types of masks and they are also easily customized.  A large percentage of Puppy-Play enthusiasts will have a custom mask made which helps them express the kind of Puppy they want to be.

One of the largest Puppy-Play groups is right here in Toronto – The Black Eagle Kennel Klub.  When we’re not in the middle of a global pandemic, the BEKK runs dozens of events annually.  Twice a month, they have Puppy-Play events at the Black Eagle Toronto, but they also have regular social events where they gather to play games, eat, go to the beach, and even going to get ice cream.  They have a summer weekend event called P.A.C.K. which is full of activities that draw hundreds of Puppy-Play enthusiasts from across Canada, the USA, and even Europe!

The BEKK has been around since 2008 and they’re a great resource if you’d like to learn more about Puppy-Play.
You can find out even more about them at KennelKlub.ca. 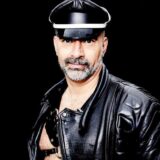 Paul (Argo) is a well-known figure in the international leather community. His 20+ year history in the community includes a year as Mr. Leatherman Toronto, Canadian Leather Man, and many years organizing outreach, educational, and social events for the Kink community.
Previous post

The Secret To Physical Transformation?